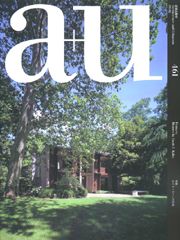 Louis I. Kahn
Over the course of a four week period in 2008, A+U had the opportunity to photograph 12 houses by the architect Louis I Kahn. This issue documents the current state of these historic houses from his first house designed before World War II to the house completed as his last project before he passed away with a new selection of images and many original drawings. In the course of research for this issue, a series of drawings documenting the design process of the Fisher house and a 40 minute taped conversation between Kahn and Mrs. Fisher were uncovered. Copies and transcripts are included in this issue and accompanied by a multitude of sympathetic photographs, technical drawings and explanatory texts.